Recently, there was a friendly discussion on Facebook about “silence”. Yes, sweet, sweet silence. I love silence, I desire silence. I crave silence. I even keep the radio off when I am driving locally. This seems to recharge me. Or perhaps it merely allows me to hear emergency sirens as they approach. It is Arizona and I keep the window cracked a teensy bit to hear them.


I like to rise early, sit on my postage stamp size patio and listen to the birds and the morning sounds. All the while enjoying my first cup of morning coffee. Milo T. Kat also enjoys the patio and yard by attempting to find her share of birds to terrorize. She hasn’t succeeded thus far, but she sure gets her exercise and she “chatters” at the birds.


As the morning progresses, Husband wakes and brings his coffee out to join me, as well as his computer where we electronically share a morning devotional from “Our Daily Bread.” The silence helps to prepare me for the word of God. It puts me in the right frame of mind and spirit. As insignificant as it may seem, it is a great blessing to me to enjoy solitude.


Today I had an auditory test. I’m loving the “sounds of silence” so much, and it may be due to the hearing loss I experienced from chemotherapy. It seems to be getting worse, or at least my asking “what?” is getting worse! The hearing loss is worse than when I had my last hearing check. The nerve damage from the chemo is a significant part of it, but there is also another issue that I’m being referred to an ENT for.


I have extreme ringing in my ears, but I’ve learned to befriend and embrace the ringing as my “white noise” and it does help lull me to sleep at night.


All and all, I’m doing well with this thing called lung cancer. My radiologist referred to me as “the poster child” for lung cancer due to it having been found so early. That was not a title I was seeking, but I’ll embrace the title, at least for now. I’d prefer the title of “Our Lady of Total Remission” but I can be patient for a while more. This entire process began on April 2, 2015, with the first surgery. Three years of ups and downs with non-small cell lung cancer. What a ride!


I have a specific Facebook group for persons, friends and family who are interested in my health issues and have committed to pray for me. I titled it “Dear Lord, Make it Count” for that is what I desire – for God to make all of this count for eternity. I belong to a small group of women and we attempt to meet weekly to encourage one another and spur us on in our Christian walk. One of my “sisters” purchased tee shirts that have the phrase “Make It Count” on them for the three of us. They are absolutely shocking pink and I love them very much!


I can, in all honesty say that these medical issues have drawn Husband and I even closer in some way. He’s had his medical issues and I’ve had mine. But the Good Lord has seen to it that we haven’t been down at the same time. Times such as these either drive you apart or closer together. One of my “sisters” that meets with us has a husband with numerous medical issues to include an amputation. He receives dialysis and she is the one who does this for him. Hospitalizations are common for them. She has been an amazing woman of strength and courage as I silently watch her in the act of care giving and loving. Her example is one of strength, faithfulness, and reliance upon the Lord.


How do you feel about silence? Does it bother you or make you uncomfortable? How did you feel the last time the electricity went down? Was the silence deafening? Or did you embrace it? I remember the heavy, moist, Ohio snows that seemed to shroud the landscape with silence. Often all one could hear was the scraping sounds of the snow shovel.


Last Christmas, Husband purchased a DNA kit for me. I was very surprised by the information on the test and began researching my Family Tree. Everything I thought to be true was not so much true. I had always heard and believed that I was a quarter Cherokee. Not a bit of Indigenous Peoples blood in my DNA! 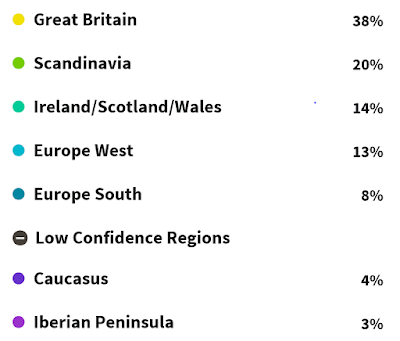 I had to decide which way to go with my Family Tree – do I go with the DNA as I was an adopted child, or do I stick solely with the family I was raised by? Well, since it was a family member who adopted me, I figured I’d just go where the DNA takes me.


I had always been a bit afraid of researching my family tree for fear of what would be found in the branches. There are some bad things and sad things, but there have been some surprising things, too.


For example, Pierce Dant Hamblin (1787-1871) was my fourth great-grandfather. He fought in the Revolutionary War. I could be a Daughter of the American Revolution! That was a nice surprise.


It turns out Lady Anne Cleves, Lady in Waiting in the House of Tudor, became pregnant with a male child who became Sir John (Lord Deputy of Ireland-Knight of the Bath) Perrott (1528–1592). He was the illegitimate son of King Henry VIII of the House of Tudor. This makes King Henry the VIII my 14th great-grandfather! (And really, what is a Knight of the Bath? I shudder to think! Did he empty the chamber pots?)


Then there are the other things I see. The families who were immigrants to this new country and died at such young ages and had many, many children. Some of those children died at birth and so did some of the mothers. One family member had fifteen children and three wives. The wives died, he would re-marry and have more children.


The Civil War claimed its fair share of family members from both sides, to include those who were prisoners of war.


I was hoping like some of the advertisements on TV for Ancestry DNA, that I would find a strong female in the mix, like the woman who found an ancestor in an African Queen.


What I know is this – I am a total white woman (sans the privilege). I was so hoping for the Indigenous Peoples blood, or an unbending African Queen, or maybe some Jewish blood. But that was not to be, unless my DNA with all of its 38% Great Britain and 14% Ireland/Scotland/Wales show I’m related to the Warrior Queen Boudicca - she was a British Celtic warrior queen who led a revolt against Roman occupation. Merely wishful thinking on my part.


My ancestors were viable humans, people who gave their lives and worked hard to make a new country and a new nation. They left their homeland and willing came to a new world to begin again with the freedom to worship as they saw fit.


A number of them were Quakers and they released their slaves many years ahead of the Emancipation Proclamation. Of this fact, I am proud and grateful for a heritage that recognized and honored human life.


Lately I’ve been consumed, perhaps perplexed by the fact that I’m struggling with “right to life” issues. I’ve always been “a church lady for choice,” but I’ve been re-thinking this stand. If I’m against capital punishment (the death sentence), then shouldn’t it be a “womb to tomb” stance rather than pick and choose? And the question I often ask, is how someone can be pro-life for a child in the womb, and still want no restrictions on weapons that kill our children and grandchildren in schools. I don’t have the answers, but I sure am asking the questions.


Suffice it to say, I’m still thinking it through and using the lens of my faith to assist me.