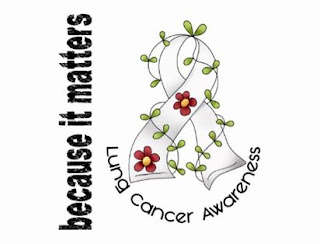 November is Lung Cancer Awareness month. It is represented by a White Ribbon. I’ve plastered my Facebook page with said “awareness” art.


Gratitude has been a reoccurring theme since the lung cancer diagnosis. Gratitude that stems from the cancer being found early; gratitude that 13 lymph nodes had no evidence of disease; gratitude that I only had to endure four chemotherapy treatments; gratitude that Husband was willing, able and such a good caregiver.

Never once did Husband complain or make me feel dreadful that he had to care for me, the house or having become my driver to and from medical appointments. For awhile there, it was like “Driving Miss Daisy”.

I do have a few upcoming medical appointments this month, and I am happy to declare that I am perfectly capable of driving myself to and from them. It’s been three months since the last chemo treatment and I will be having PET scans and seeing the oncologist every three months until I hear otherwise. I did meet with the surgeon in October and he agreed that I should only have to meet with the oncologist now. Again, I am grateful.

For almost six weeks now, Husband has been having an issue with his right knee. He's using a cane to walk and cannot drive. It’s been painful and swollen. He’s been to the ER twice and his primary care Certified Registered Nurse Practitioner (CRNP) once for this. During the last ER visit they prescribed a highly addictive pain reliever. He only took it for a couple of days before he began having problems. The medication nearly shut down his kidneys. He quit taking the medication and that issue cleared right up. After seeing his primary care CRNP, he is now scheduled for an MRI.

The worst part of this is that he cannot remember a distinct time he hurt or twisted his knee. I trust the MRI will show an underlying cause and that the issue is treatable. They also have him scheduled to begin physical therapy in December.

This is in addition to an already existing medical condition that he is being treated for. In fact, he will be having a biopsy this coming Friday. I must chuckle here as he forgets the name of the procedure (biopsy) so he calls it an autopsy! I remind him he is not dead yet!

I really liked his CRNP. She is a no-nonsense, tell-it-like-it-is professional. Since all Husband’s care is at the Southern Arizona Veterans Administration Health Care System, I’m thinking she was probably a military nurse. Bless her heart.

I know there is a lot of controversy surrounding the VA Health Care at large, but we have never been disappointed with his care there. As a matter of fact, our facility is rated number 2 in the nation. Again, gratitude!

If everything turns out well with his biopsy, then he is scheduled for a procedure on the 20th of this month.

And so it goes… I am now his caregiver. I will admit to times of feeling a bit inconvenienced. To counter that, I pray every single night that I will have the grace to serve Husband and to not complain. Frankly, he set a very high standard for me. I am determined to give him the same quality of care he gave me and to do so with the heart of Christ.

I am beginning to think that I should again change names of my blog… “Love in the Time of Chemo” since I am no longer receiving chemo. However, with that being said, I paid for the domain for a year. I have a while to make a determination.


Two are better than one because they have a good return for their labor. For if either of them falls, the one will lift up his companion. But woe to the one who falls when there is not another to lift him up. Furthermore, if two lie down together they keep warm, but how can one be warm alone? And if one can overpower him who is alone, two can resist him. A cord of three strands is not quickly torn apart (emphasis is mine).

When I read this verse, I am drawn to it like a moth to a flame. It describes “a friend” and how if they lay down together they keep warm. It goes on to describe a cord of three strands. I’m no scholar, but I believe this to be the Holy Spirit, especially as it relates to marriage.

There are many and various stages of marriage. The passion of being newly wed; the struggles of employment, living expenses and children; then finally when it all settles down and the empty nest arrives. Yes. We are friends. We have been friends since the inception of our relationship, but like all friendships it changes through the years. The intimacy is much sweeter now. It is much deeper, too. Like friendship, there are different facets of intimacy.


Our marriage is not perfect, except to say it is perfectly flawed. That is one of the tests of marriage. Will we work through the difficulties or will we call it quits? It’s been said that “aging ain’t for sissies.” My thought is that marriage isn’t for sissies, either. But then that draws me back to the scripture verse I quoted - A cord of three strands is not quickly torn apart. Come, Holy Spirit, and fill our hearts. Amen.

Husband's biopsy did not happen. According to the urologist, his PSA count is elevated due to medication he is taking, so it is actually only half of the number. He is also being treated for a UTI. So... he is scheduled for an MRI on his knee on the 24th and then to meet with the urologist on the 25th.

Then, we will celebrate and honor Thanksgiving! What are you thankful for?